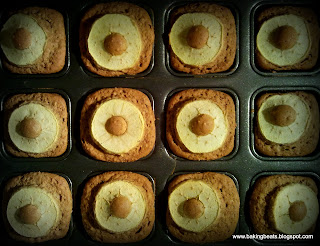 This trilogy of Apple and pear bakes started off as a traybake recipe which then got reduced and squeezed into a brownie tin and cupcake bake. The Tray bake produced the the most pleasing result, with the cupcakes 2nd, and brownie tin 3rd. The brownie tin was just a little too shallow and produced the driest of the bakes due to the amount of baked surface area compared to insides. They did though produce the most snigger inducing results. What? Nipples? I didn't say nipples! Who said nipples!?! Shocking!

The final batch of cupcakes were also pimped up with a bored-out centre of creme fraiche icing which made a bloomin nice little combo!

Ingredients for the 12 hole brownie tin and 12 cupcakes:


Preparation is the same as above :) Apart from you'll want 12 apple slices for the tops.

Soooo immature to think they look like nipples!!! You MGMT - Kids you!


3 ways to bake this, and a crackin vid from the 3 Beastie Boys - Sabotage


and finally (I've heard that before! - ed.) The mighty Pendulum - Propane Nightmare (Did they split recently? Can't remember, will have to check....)