Oxford Rocks cake for The Oxford Bake Off 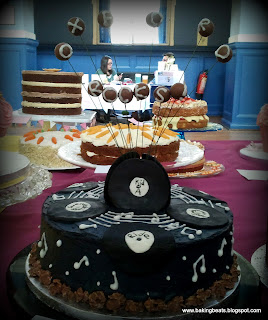 A long, long time ago, March 24th to be precise, there was in Oxford Town, a Bake off. I attended along with this time-eating cake, some mad chocolate brownies, and a loaf of Sun-dried tomato and basil bread.
The cake and brownies took hours and hours of planning, practice runs, frustration, sorting logistics and setting up. The bread took a few minutes, got un-ceremonially placed on a plate at the bake off, and then won it's category! Yay! lol To be fair to it though it did bake really well, looked ok, and tasted good.

So, to start with, the cake. As it was the Oxford Bake Off, I wanted to do something Oxford based, and after a few other ideas, came up with a music from Oxford theme, and the original design is pretty much what the final cake ended up being. It is a Chocolate and Orange sponge made in a rock n roll leopard skin stylee, with a truffly chocolate filling, then I tried to make an Oxford blue buttercream, but didn't quite get there, then I decorated with regalice records featuring bands from Oxford (Radiohead got the 3 centre spots), some icing musical decoration, a base ring of Crunchie rocks, and finished off with a bit of airy height from the 'Oxford Rocks!' Maltesers. The last time I used maltesers on the Valentines cake, they were randomly placed, so when I went to line these up I didn't foresee the frustration of getting the little sods lined up properly lol

The Oxford Bake off was conceived by Kate and was a charity event for the benefit of:

As I write this, there is currently a wonderful Oxford Bake Off recipe book available to buy for just £5 from here with contributions from the likes of Holly Bell, Kate Shirazi, Oxford Cupcakes, and Jane Asher!

Piccies from the bake off:

And a few tunes from the Oxford boys and girls:

Radiohead - Creep (Uncensored, so don't click 'play' kids! Oi, no, stop that, oh now you've done it, that's the end of the world, you're all going to end up foul mouthed criminals, oh wait, that's from playing COD.) Oh, ignore all that, it's the radio friendly 'Very' version lol

Some tunage from Swervedriver - Dual


Classic from The Auteurs - Lenny Valentino


Finishing with the awesome Ride - Time of her Time