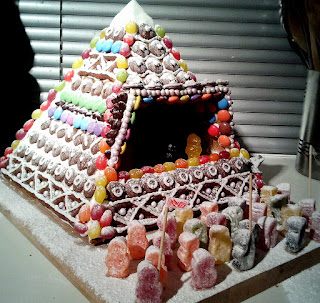 Being born a few miles from the Pilton site I've always been proud, when living in the area, of having the best festival in the world on my doorstep. Each time I've been leaves so many life long memories of all the bands, comedians, cabaret and theatre acts, and other festival goers. From the deepest, stickiest mud to the hottest, dustiest, heatstroke inducing years, and from camping the full five days, to helping out on the sewage side of things (Imagine being up to the tops of your wellies in human....nevermind) and popping home each night to a nice shower and bed. Glastonbury is the sweetest festival, and so...

Sweet indeed! There must be at least, oooh, 50 calories in this :) Hundreds of thousands of Jelly babies rockin it in front of the famous Gingerbread Pyramid stage. (I think it's Jelly Baby Bloc Party playing, but they've forgotten their instruments. Silly Jelly BabyBloc Party!)

Entered in The Great British Baking Club's Gingerbread house challenge, it was a joint winner of 'Most creative interpretation of a Gingerbread house' (I think they made a special category for special entries lol) along with @cakeboule's awesome Gingerbread VW Campervan! :)

I miniaturised myself, jumped in a tiny helicopter and took this footage :)

So, onward to some tunage! Sticking to the Pyramid stage to start with, which I rarely do at Glastonbury, kicking off with the only time I've managed to see Muse do Citizen Erased. It was emotional.

...and then, whilst lots of strange people were sat in a couple of fields watching a game of football, the rest of us were enjoying the delights of Glastonbury, including a bloomin good shout-a-long with the following two...

Not normally my kind of thing but this blew me away! Energy and Soul incarnate! Blasting the Other Stage Janelle Monae - Tightrope

One of the reasons I had to go back in 2010, after a long break, was seeing this on TV. Pendulum, I think, reaching the zenith of their career with their 2009 Glastonbury set. Gives me goosebumps watching this, and I wasn't even there lol. The 2011 Pyramid set just didn't cut it for me. It felt, lacklustre.
2009 - Pendulum - The Other Stage - Different & Remix of Clavin Harris's I'm Not Alone.

Moving on to the awesomeness of the Theatre and Cabaret @ Glasto

...and finally, Arcadia Spectacular! The South-East doing what it does... (Full screen HD required :) )

And finally, finally! Chase and Status - Sweet Sensation from 2011. THE Biggest set to hit West Holts for, well, ever! :) (Although, I missed a bit due to ambling down from, um, Radiohead in The Park I think (?), and thinking Chase started half an hour after they did lol)

As you can see from the videos, I think I captured the minute details of the Pyramid stage, from the regular June snowfall, right down to the Smarties light system :) Long Live Glasto!

P.S. I'm sooooooo sorry Michael, it was the beer :)

P.P.S. 14/2/12 - A massive thank you! to the wonderful Glasto peeps who have posted Gingerbread Glasto on the Festival Site! I am one big messy grin!